GROUND at Chantilly described as ‘very soft’ has not discouraged connections as a bumper field of 17 was declared for the Prix Du Jockey Club on Sunday, including six trained in Britain and Ireland.

The leading contender from overseas is the John Gosden-trained Foundation, who was last seen finishing third to stablemate Wings Of Desire in the Dante at York. He has been drawn in stall 12 and is the 9-2 favourite with Coral.

Foundation was previously beaten at odds-on in the Craven on good to soft ground and trainer John Gosden held some concerns over the ground on Friday.

“As they are shutting museums in Paris as the water is coming over the banks of the Seine I don’t know what we are going to get, as I’ve no experience of Chantilly when it’s as wet as they say it is,” said Gosden.

“The horse is in great shape and good to soft ground would be fine for him but if it’s testing it could turn into a slog that suits nobody.”

Aidan O’Brien saddles the only two Irish-trained runners in the field, Irish Guineas fourth Bravery (drawn 14) and Black Sea (1), who took a Listed contest at Saint-Cloud when last seen.

Also represented from Britain are Robin Of Navan, who won the Criterium De Saint-Cloud on very soft ground last autumn, as well as Imperial Aviator and Ventura Storm, winners of the London Gold Cup and Feilden Stakes respectively.

Coral make Bravery, to be ridden by Ryan Moore, a 12-1 chance, with stablemate and Seamie Heffernan’s mount Black Sea available at 25-1. 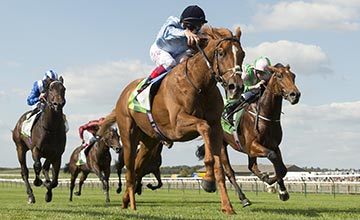 Mignolet: Liverpool in better position to win title than in 2013-14

Ancelotti a champion in all respects – Ribery

Drivers are warming up to autonomous cars. Mostly.